Review: The Drobo Mini is all about ease of use 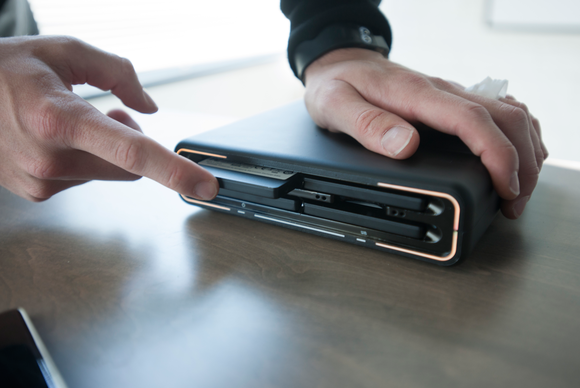 With a Drobo Mini you don’t have to use identical drives, or even drives with the same capacity or speed. You can throw a 80GB drive and a 500GB drive in a Drobo and it’ll give you as much protected storage capacity as it can without you having to do anything. That said, the Drobo doesn’t always act as you might expect, and the extreme ease of use comes at the cost of performance.

Before you can use your Drobo Mini you have to install the Drobo Dashboard software and put some drives in the Mini. Drobo Dashboard is easy to find and install; other than being a little slow to find our Drobo I didn’t have any major problems with it. The dashboard can warn you when you’re running low on space and can email you alerts, as well as format and restore your Drobo.

The magnetic front panel is super easy to remove (almost too easy at times), it just sort of comes off. Behind the panel are four slots for 2.5-inch drives; all you have to do is push the drive in till you hear a click. It feels like you’re inserting gigantic SD cards. You can start with just two drives, but I put four in right away.

When you connect your drive to your Mac or PC with Thunderbolt or USB 3 and follow the prompts to format it, don’t be surprised that it shows up as a 17.5TB volume—Drobo is just making sure that when you add capacity, it won’t have to recreate the volume visible to the OS.
Posted by lana osishvili at 11:38 AM No comments:

PROS / The iRobot Roomba 650 was able to get over a lot of obstacles that stopped competitors.

CONS / This one struggled quite a bit on pet hair, leaving some behind and getting a lot caught in its brushes rather than into the dustbin.

VERDICT / This is an older model that lacks newer innovations like a phone app, but it has good suction and almost never gets stuck.


The Roomba 650 is one of the older models in iRobot's product line, but it is of such high quality, so well-known and so well-regarded that it still earns a spot in our comparison of the best robot vacuum cleaners. There is only one competitor that had more suction than the Roomba 650, which also was among the best for its ability to maneuver around obstacles. It may not have all of the latest upgrades, like a mobile app, but this unit does a great job of cleaning – and for a very low price.

In our home tests the Roomba 650 got up and over an almost 2-inch transition from hardwood flooring to tile quickly. After watching a long line of competitors hesitate and even get stuck completely on the same threshold obstacle, it was refreshing to see this one glide right over it and keep on vacuuming. It did have problems on one transition from hardwood to a thicker carpet but for the most part it was a champ in terms of self-sufficiency. This is one of the ones you would be safe to leave unattended and expect to find it doing its job when you return rather than getting stuck.

In laboratory suction tests this vacuum robot was very impressive. It struggled on pet hair, on both carpeting and vinyl flooring, but for other test messes like kitty litter and Cheerios it was always among the best.

You do not get a mobile app or remote control for programming and changing your settings with this vacuum, which can make it more difficult to control. You have to control it just using the buttons on the top. Also, its screen offers less information than some of the others, so it was not the most intuitive to use. One thing that makes it easier to use is its rubber bumpers on every side, which ensure that it does not leave scuff marks on furniture and floorboards.

It weighs just under 8 pounds and measures approximately 13 inches around, which is average. That size proved to work just fine in home tests because it was able to clean around the legs of the dining room table and under couches, even though it was not particularly petite. A carrying handle would have been nice, but since the 650 needs repositioning so rarely it won't matter very often. It almost never gets stuck, and when the battery is running low the vacuum automatically returns to its base by itself.
Posted by lana osishvili at 4:55 PM No comments:

8 Things You Need to Know About Raising Venture Capital

If your startup is growing, at some point you will likely be seeking venture capital. Unlike angel investors, who typically write checks between $10,000 to $100,000, VCs can write multi-million dollar checks. This means that VCs support startup growth from seed to much later stages.

Because VCs deploy large amounts of capital and expect significant returns, the process of raising money from these so called institutional investors is far from trivial. At Techstars, we spend time with the companies talking about raising money, and in this post I'll discuss some of the things you need to know if you are looking to raise venture capital.
Read more »
Posted by lana osishvili at 9:32 AM No comments:

But these causes of death don’t exactly illustrate what went wrong for the startup during the course of its life, much in the same way that listing a heart attack as a cause of death doesn’t directly indicate an unhealthy lifestyle that may have led to it. Like with human life, some startup deaths come out of nowhere and can’t be helped, and some are both predictable and preventable.

Read more »
Posted by lana osishvili at 9:27 AM No comments:

5 Tips to Getting an Accurate Valuation

When Brian Duerring decided last fall to pursue venture capital for StreamSpot, a Cincinnati-based start-up that provides automated streaming services to faith-based organizations, he needed to calculate a valuation for his business to effectively negotiate terms with potential investors.

“I knew there was going to be some sort of cap or ceiling, and I felt it would be smart to have that ammunition in my pocket for when that first term sheet came over,” he explains.

To arrive at a figure, Duerring employed various evaluation models, then incorporated the value he assigned to the company’s physical assets and intellectual property. During negotiations, he was pleased to find he did not get much pushback from investors, and StreamSpot, which was founded in 2011 and operates in 40 states and seven countries, closed its first round of seed financing in March.

Read more »
Posted by lana osishvili at 9:25 AM No comments: